Athletic trainers can play many roles within the health care
realm.  Often, that can lead to a misconception of what an athletic trainer’s role actually is.  So when I had the opportunity to speak to
Minnesota basketball star Lindsay Whalen, I thought, who better to discuss an
athletic trainer’s role?  She started her
journey at Hutchinson High School in Hutchinson, Minnesota and has played for
the University of Minnesota Golden Gophers, Connecticut Sun and Minnesota Lynx
of the WNBA, the gold medal winning USA basketball team of the 2012 Olympics
and champion European basketball teams. With each of her basketball endeavors,
she has been working with athletic trainers along the way.  I had the opportunity to ask her a few
questions.

Q:        How
do Athletic Trainers play a role in your day-to-day life as a professional
basketball player?
Lindsay:        During my WNBA season and overseas seasons I would say that the athletic
trainers for our teams play a huge role in my day-to-day life. And those roles
increase with each season in both leagues. I think that each year I try and
learn more from our athletic trainers and take their advice more and more. It
just helps me continue to play at a high level and I know that if I do the
things they are telling me to I will be able to have a longer career. My first
few years in the league I was pretty much only in the athletic training room to
get tape and then take an ice bath after practice. But now I am in the athletic
training room for at least an hour before each practice and game and also about
a half hour after getting therapy and icing.
Q:        As
a professional athlete, what is your view as an athletic trainer’s role with
the team?
Lindsay:        As a professional athlete I feel that athletic trainers help us
stay healthy and provide us with therapy, exercises, and discussions about ways
to help us stay on the top of our games. I also think they have a huge part in
keeping us on the right nutritional path, hydrated, sleeping enough, and just
generally being there for us on a day to day basis. They are also a huge part
of the team because we almost spend more time with them than the coaches. Having
a good working relationship is really key, especially as a professional athlete
during a long season.
Q:        You’ve played basketball at many levels and across the world.  From high school, college, WNBA, Europe and
Olympics.  Does the role of an athletic
trainer differentiate between those and if so, how?
Lindsay:        I guess I would say that in High School we did not really have an
athletic trainer. I think we had someone who came in for games but other than
that we did not get therapy or taping or anything. Then overseas, things are
different than home and a lot of times the therapy and taping is much
different. I wouldn’t say it is better or worse. They use different methods
than we do in the US. College, WNBA, and the Olympics are all much of the same
as far as therapy, taping, and time spent with the athletic trainer and doing
therapy. And like I said earlier, the longer you are with the team, or playing,
the more time you end up spending in the athletic training room.
At OSR Physical Therapy, our athletic trainers utilize the
same education and skills and work towards achieving our goal of providing the
best care patients. 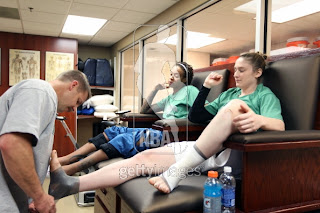 Here is Lindsay pictured with Chuck Barta, ATC for the Minnesota Lynx