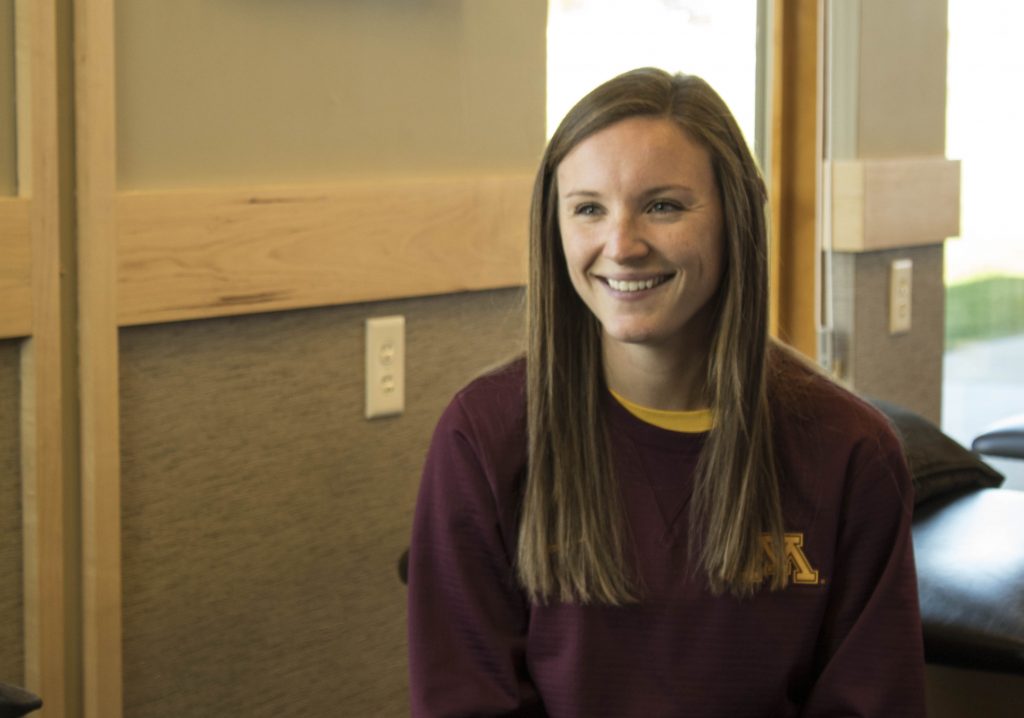 It’s been nine years since Erin Murphy went to physical therapy for an injury. Back in high school, she had started seeing a physical therapist because she wasn’t able to fully participate in dance due to hip pain. Physical therapy had helped her become pain-free then, and now she’s back at it due to a new kind of injury – a concussion and whip lash from a car accident.

Being on the high school dance team meant long hours of dancing, working out and conditioning. Despite what some people might think, dancing causes a lot of strain on the body. Especially since dancers have to maintain flexibility, they’re at a higher risk of injury – strained muscles, inflamed tendons, and pain in the hips and back.

After years of dancing, Erin began having pain in her hips. It became so bad that she could barely dance. The last thing she wanted was to be sidelined from the thing she loved doing the most.

“I started seeking physical therapy when I wasn’t able to fully participate in dance because of the pain,” Erin said. “I started going to OSR because of convenience and they put me on a treatment that got rid of the inflammation and pain in the hips.”

The pain was caused from tendinitis in the hips and an SI join dysfunction. After a few a sessions, she was already starting to notice the difference and soon she was back to dancing. And, not only did physical therapy help in the recovery from tendinitis, but she was also given strengthening exercises to prevent further injury.

9 Years Later and back at PT

“I was seeing somebody else at a different clinic for the first eight months after my accident, but I wasn’t getting anywhere. That’s when I started going back to OSR and seeing a physical therapist there that specializes in concussions,” Erin says.

“Within the first two weeks of treatment at OSR, I was seeing results and getting better.”

At OSR, they worked on her neck and the alignment of her vertebrae due to the whip lash. The muscle spasms she was having were going away with each visit. They also worked on retraining her eyes and balance that was caused from the concussion she sustained. Now, she is on the road to full recovery.

“It’s the best physical therapy clinic I’ve ever been to.”

Erin says that she will always keep coming back to OSR, especially after her experience at a different clinic.

“The problem with the other clinic was that the treatment wasn’t very individualized there. It was very cookie-cutter and I wasn’t getting anywhere. OSR really is the best physical therapy clinic I’ve ever been to.”

What makes OSR so great, according to Erin?

“I love all the people who work here. Everyone is super professional and knowledgeable and friendly. You feel comfortable when you’re in here,” Erin commented.

“You definitely feel like you’re being taken care of by people who know what they’re doing and focus on you as an individual patient with different needs,” she said. “I will always keep coming back.”

OSR is there for any patient.

Although many people might find themselves in a similar situation as Erin, OSR works with each patient on an individual basis and creates programs that are unique to each person. Contact OSR today if you’ve been injured and want to live pain-free again.