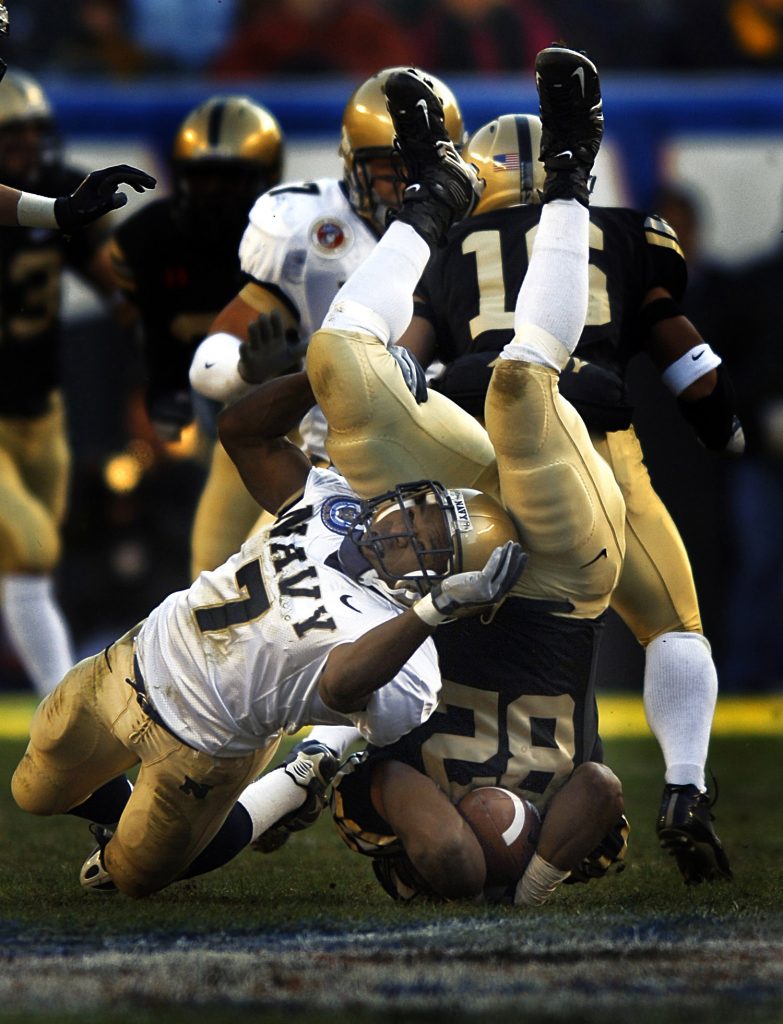 051203-N-9769P-549
Philadelphia, Pa. (Dec. 3, 2005) – Navy Slot Back Reggie Campbell (7) of Sanford, Fla., tackles Army Running Back Scott Wesley (82) during a punt return during the 106th Army vs. Navy Football game held for the third consecutive year at Lincoln Financial Field. The Navy defeated the Black Knights of Army 42-23. The Mids have now won the past four Army-Navy battles bringing the all-time series to 50-49-7. The Navy (7-4) has accepted an invitation to play in the Poinsettia Bowl in San Diego on Dec. 22. U.S. Navy photo by PhotographerÕs Mate 2nd Class Jayme Pastoric (RELEASED)

Diagnosing and treating concussions have come a long way over the past few decades. From baseline testing for athletes to physical therapy programs designed to treat concussion patients, medical and health care professionals have been looking to improve the odds of a full recovery from a concussion. But what about prevention?

Preventing concussions is a fairly new concept compared to diagnosis and treatment. However, even over the last decade, technology has advanced in the area.

1. Advanced Padding For Protection Against Concussions

Helmets for football players have become more advanced over the years, particularly after concussions took the forefront during the NFL controversy. However, more NFL veterans are taking an active role in developing better padding in the prevention of concussions. Shawn Springs has developed a new helmet that has a padding system inspired by the car seat technology of Safety 1st. The technology puts emphasis on impact protection, which Springs spent two years studying. The technology is still in the beginning phases, but holds great promise according to medical and technology experts, along with former and current NFL players.

2nd Skull was developed by a father who saw his son suffer a concussion from falling off his bike and wearing a bike helmet. It’s a cap worn under the helmet. Although this cap is amazing in its simplicity, the technology of the fabric is advanced. It’s extremely lightweight and is designed for impact protection, being made from urethane molecules – a soft and flexible fabric, but hardens under pressure.

3. Taking A Look At Biomechanics

One of the most often ignored pieces for injury prevention, including concussions, is what can be done with the body to minimize the risk. Researchers asked this simple and often overlooked questioned and the study conducted produced amazing answers. According to the study, there could be a direct correlation between neck strength and concussions. It found that those players with weaker necks were more vulnerable than players with stronger necks. Although this study was limited to rugby players, it could have an impact on other sports as well and affect how athletes train.

Mouth guards have always been part of the protective gear against concussions. However, some people are taking a closer look at the technology and the role it plays in that protection. One Minnesota start-up company, called Prevent Biometrics has created a high-tech mouth guard that is a head impact monitor. The monitor is designed to measure impacts, but is still just as flexible than other mouth guards on the market. The point of the monitor is to determine if the player has a concussion.

OSR has physical therapists that specialize in concussion treatment and baseline impact testing. We can help treat concussions so that you can make a full recovery. Contact one of our offices today for more information.