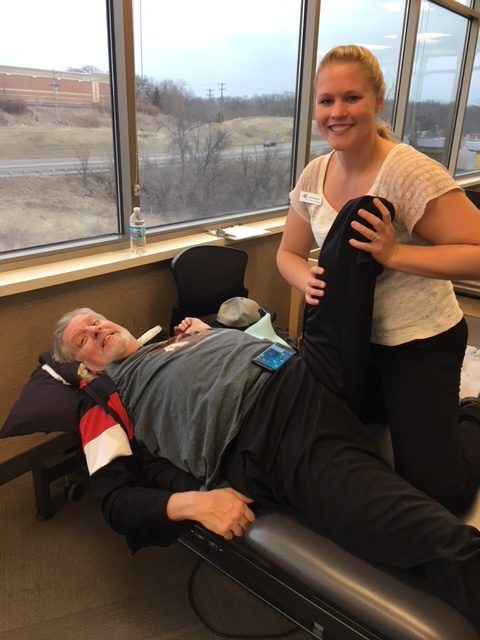 In 2017, OSR Physical Therapy patient Bob French lost his left leg to a bacterial and bone infection. Post-amputation care is a long road to recovery, but he’s motivated to push himself harder than ever before to get back to normal.

You could say that 2017 was a hard year for OSR Physical Therapy patient Bob French, and it would be a gross understatement. However, French would say we’re all wrong as he considers himself lucky. He might’ve lost his left leg, he said, but he is feeling stronger and better than ever before and he even considers himself lucky.

“I consider myself very fortunate, and I know most people think that’s crazy,” said French. “But I have good support and I know what it’s going to take to get back to normal, and I’m going to get there.”

French lost his left leg to a bacterial and bone infection and he’s had a long road back to recovery. However, he’s determined to recover fully and be stronger than ever before – even before the amputation. Post-amputation care and recovery is a long process, but having the right attitude, according to French, is the key to seeing it through to the end.

On Losing His Leg: “I Feel Lucky”

In February of 2017, Bob French was involved in a work-related accident that resulted in a chemical spill on his left foot. He had to get a skin graft and it was during the graft that he got a bacterial infection called necrotizing fasciitis, more commonly known as flesh-eating bacteria.

“It ate the flesh going up my left,” recalled French. “And then, I ended up with a bone infection. They [the doctors] really did everything they could, including 15 surgeries between February and June, to save my leg. I was in the hospital for three and a half months.”

Those 15 surgeries included first losing his big toe, then his other toes. However, the infection had spread to his bone, causing him to lose his entire foot and then finally his leg.

For anyone else, this would have been a difficult situation to bare. For Bob, however, he considers himself not just lucky but extremely fortunate.

“Look, it sounds crazy, but really I truly believe I’m fortunate,” said French. “My daughter had bone cancer when she was just 16 and she lost her lower left leg just like I have. She’s a 22-year veteran of amputation and out running and snowboarding. She’s been there for me the whole time. She and I went through it together with her back then, and now we’re going through it together again for me. So I’m really fortunate to have her as my support and to have physical therapists [at OSR] that push me.”

It was only a few weeks after losing his leg that French headed to physical therapy. He was still in a wheelchair at that point, so he was working on upper body strength mostly. However, when he got his prosthetic, it was all about growing stronger and learning to walk again.

“We had to work on getting my right leg strong first to handle all the extra work and stress,” said French. “Now, they have me working on balance a lot.”

For Bob, it’s all about getting healthier. It’s not just getting back to normal, he says, it’s about maintaining a better lifestyle than what he was doing before. He’s using physical therapy and his long road to recovery to not just grow stronger but be healthier.

French says that he didn’t lead the healthiest of lifestyles before the amputation, resulting in diabetes and other medical problems. However, he doesn’t use this as an excuse for not recovering from his amputation. In fact, he uses it as motivation to be healthier than ever before.

“I’ve lost a lot of weight – 60 pounds – and I’m keeping it off. I’m getting in shape despite not having my left,” said French. “I’m going to be 65, but I’m pushing myself like a 20-year-old athlete so I can get stronger and have a normal life. I’m going to get there.”

His physical therapy, said French, is part of that entire process. He considers a full recovery to not just be recovery from amputation. He also believes the recovery means being and staying healthy.

The recovery process may be long for a post-amputee. However, according to French, it’s all attitude and the right support system.

“My physical therapists are always looking out for me and pushing me to be better,” said French. “They’re great motivators and it keeps me coming back, even on the hard days.”

Attitude is everything to Bob French, who says that if he wants to have a normal life, he’ll have to work harder than ever before to get to that point. The key, however, is to not push too hard, which his physical therapists remind him every session.

“They’re always telling me to not push myself too hard where I’ll hurt myself and I just have to remember that,” said French. “I’ve had so many setbacks with other health issues during this entire time that we’ve been focusing on just taking one step at a time to get me back.”

His goal: to be able to have equal load-bearing on each leg.

He’s unsure whether he’ll ever get there, he said. However, he’s determined to try his hardest and continue his physical therapy and healthy lifestyle.

“I know it’s working,” he said. “Because I can feel the difference and I can feel I’m getting closer to my goal. I feel stronger than I’ve felt in years. I have no complaints. I’ve lost a lot of weight and I’m keeping it off. I’m getting in shape despite my leg. I’m going to be 65, but I’m pushing myself like a 20-year-old athlete so I can get stronger and have a normal life. I’m going to get there.”