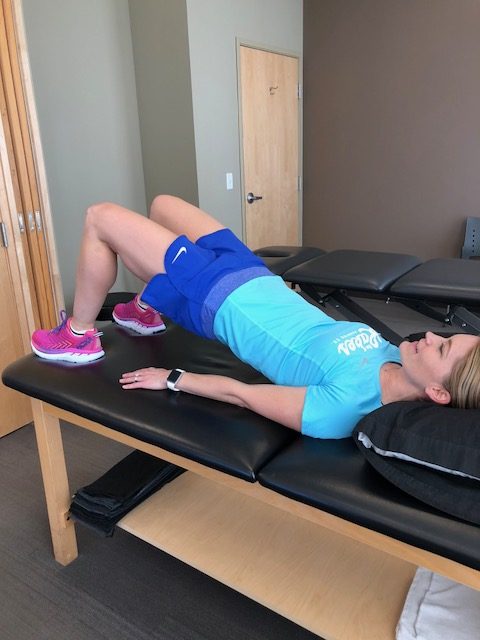 OSR Physical Therapy patient Heidi Leighton had problems her whole running life with hip and knee pain. She had no idea it was related to weakness. Strength training and physical therapy were the answers to finally turning around her life after 26 years of running pain.

It was supposed to be just a normal routine training run for Heidi Leighton as she stepped out into the cold winter morning. The ice and snow made it difficult for stability as she planted each foot into the snow-covered pathways. With each step, she was reminded of the constant nagging pain in her hips and knees – something Heidi had struggled with her whole life in running.

She had met some friends that day to go on a simple 12-mile training run for the Boston Marathon. Just a few minutes in, however, her leg gave out with no warning.

“I don’t know why it happened,” said Leighton, remembering back to her fall that caused a huge gash, tearing through her winter clothes and her knee. “I was lucky, though, because it was only a really bad bruise. I could barely walk for a week because of it and I felt like I got hit by a car, but it could’ve been worse.”

Leighton finished the run with her friends – not the smartest decision she admitted. “I stupidly continued on the run. The only reason I kept running, I think, was because I wasn’t just going to quit in front of a bunch of people. I’m competitive, what can I say?” she jokingly admits.

After getting back from the ER, she realized that she still needed to find the underlying cause to her collapse and, more importantly, why she was experiencing pain in her hips, knees, and hamstrings.

Heidi turned to physical therapy, and she found out that the number one cause of her problem was lack of targeted strength training.

The 37-year-old mother of three has been running competitively for over 25 years. Even in high school, Leighton recalls have the same problems with her hips and knees. However, it was never enough to really check into and when she finally did go to physical therapy it was never effective enough.

“I’ve been to physical therapy before at other clinics, but nothing really stuck or seemed to fix anything, until now,” said Leighton

Leighton had initially gone to a different physical therapy clinic prior to coming to OSR. However, she had little success. Before OSR, the treatment was not as targeted or as comprehensive as she needed it to be to get her ready for the Boston Marathon. She had less than two months to recover from the fall and prepare for the marathon, so she needed a treatment plan that would help her achieve that goal.

“I was really impressed with how thorough Katie Dahl and Kyle McCuskey were with my diagnosis, assessment, and treatment compared to my previous experiences,” said Heidi. “They were really confident that they could get me back on track quickly before my marathon.”

At first, Heidi was skeptical that anything would solve her problems. However, Katie and Kyle both found that she had some weakness issues that were directly causing her hip and knee pain. During her initial assessment, her physical therapist, Katie, checked her alignment and evaluated her strength. She was able to determine the root cause of not only her pain but also why her leg gave out. Through resistance exercises and movements such as squats, they found that there were some weaknesses that were leading to misalignment issues and instability.

“I was not warming up or cooling down properly and definitely not keeping up with my general strength training,” admitted Heidi. “I now know for a fact that this all led to a snowball effect and was a recipe for disaster.”

They found that Heidi needed to strengthen her glutes. Her physical therapy focused on the strength training that would target those muscles, along with the hips and knees. Balance was also a big opportunity for Heidi to work on to increase her stability.

After just five weeks of physical therapy, Heidi could tell there was a major difference in how she was feeling while running. Furthermore, she felt stronger than ever before while running. It was still difficult at first, Heid says, as she had to scale back the running.

“I honestly had my doubts. Two weeks into my therapy, I had to do a 20-mile run and it was terrible; I had to walk the last mile and a half. I remember thinking: ‘How the heck am I going to finish this marathon if I can’t even get through this run?’” Heidi recounted. “But I just stuck with it and did exactly what they told me to do. I worked really hard and I pushed myself, giving it my all. They kept giving me more and more exercises each time, but they were careful not to overdo it.”

“I needed balance with my running life and to not push myself so hard,” she said. “The last time I ran the Boston Marathon, I had a terrible experience because I overtrained; I pushed myself too hard. But now, I’ve backed off of my running and I changed my goal to just being able to finish this marathon. And it certainly worked as I did finish and I finished stronger than I ever expected.”

Heidi finished the marathon in 3:42 – about twenty minutes slower than her qualifying time. However, she said she felt better than she had ever felt during the race.

“I kept on expecting to hit the wall, but I never really did. My body held up and I wasn’t miserable with hip or knee pain,” she said. “I felt good and recovered faster than I’ve ever recovered from any other marathon I’ve done. I know that I wouldn’t have been able to finish this marathon if I hadn’t done physical therapy.”

Heidi intends to run for the rest of her life – or as long as her body allows, she said.

“I used to think that I would just do Boston and then be done. However, I’ve just felt so great that maybe I will do some more racing this summer,” Heidi commented. “I know that the only reason I feel stronger than ever before is because of physical therapy. It really made all the difference.”

However, the key, Heidi said, is not just physical therapy. It’s continuing what you’ve learned after therapy is done.

Even though Heidi had her doubts heading into physical therapy, she was happily proved wrong in her skepticism. One of the biggest benefits of the right kind of physical therapy is individualized and targeted therapy. This type of therapy focuses on the right strengthening exercises to achieve individual goals. Furthermore, it leads to lessons that extend outside therapy and contributes to better training and exercising.

“I came away with the tools needed to keep myself strong and injury-free,” Heidi said. “I train a lot smarter now and I keep up my strength. There’s still a lot of good running left in me and I want to run for the rest of my life. Now, I think I’ll be able to.”

Related Content:
Top Running Tips from our physical therapists and athletic trainers.
Training Your Best
How To Find The Right Physical Therapy Clinic