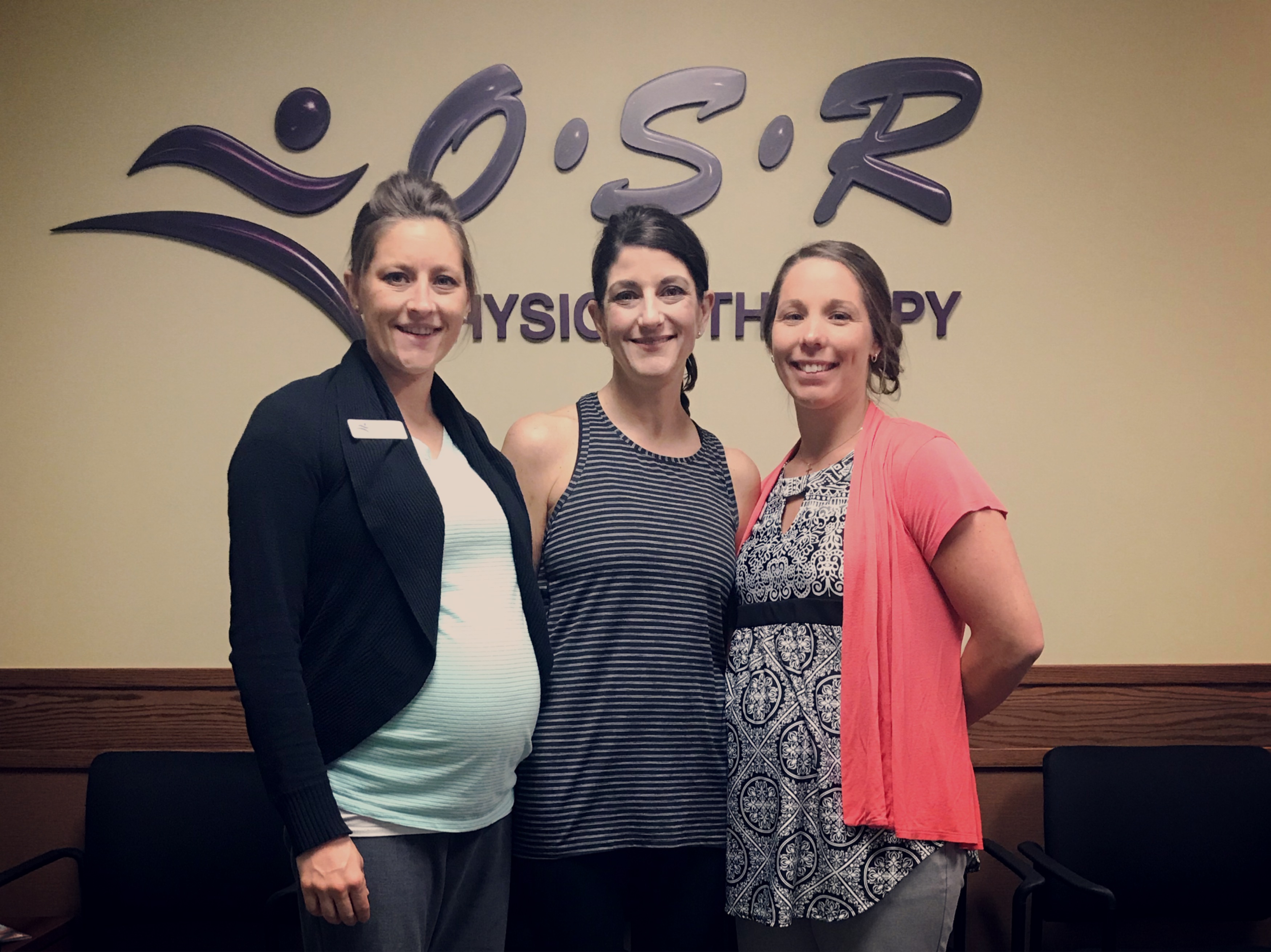 OSR Physical Therapy patient Julie Pfieffer (pictured above, middle) had problem after problem but found the solution in physical therapy to being pain-free. “I’m just a lot smarter now about how I live my life,” said Pfieffer. “I haven’t felt this good in over a year and a half and it’s absolutely due to physical therapy.”

Sometimes it’s not one incident resulting in pain that causes difficulties in life. Sometimes the cause of pain is the result of a buildup of issues. Even for the fittest and the physically active, pain can start appearing as if out of nowhere. This is exactly what happened to OSR Physical Therapy patient Julie Pfieffer and it resulted in back surgery and a long road to being pain-free.

“I had back surgery about a year and a half ago for a herniated disc,” said Pfeiffer. “There was no one incident that caused it. It started with pain in my left leg and it just kept getting progressively worse until I finally went in. I don’t think we’ll ever know what caused it.”

The guess was that it was due to carrying heavy bags and how she was carrying herself. However, physical therapy was never recommended as a post-surgery treatment. It wasn’t until she started having other problems that she sought out additional assistance so that she could get back to living a pain-free and active life.

‘I Just Wanted To Feel Good Again; Be Pain-Free’

After her surgery, Pfieffer started feeling great. However, it didn’t last long and she started having flare-ups and pain returned. She went back to her doctor who then assessed that she had an IT band issue due to the way she had been carrying herself, especially after the surgery. The recommendation was physical therapy to build up core strength to support the back, posture, and range of motion of the knee.

The IT Band is a tissue that stabilizes and protects muscles, helping with movement and stabilizing the knee. Although weak hips and glutes are the primary culprits of IT band syndrome and other knee problems, for Pfieffer it was a host of weaknesses stemming from the core.

“We assessed that I had an IT band issue and that it was probably from the way I had been carrying myself for so long,” said Pfieffer. “My goal is to live an incredibly healthy and long life, so it became all about building up my core strength to solve all my issues and getting back to a place where I’m pain-free and as active as I can be.”

During Pfieffer’s physical therapy, she realized that the key to getting quick results is from constant communication with her physical therapist. Although they started with building up her core strength to deal with her back and IT band issues, other problems started to arise that she questioned.

“I want the best quality of life I can possibly get. So, when I started having pain elsewhere, I asked about it, wanting to make sure that it was nothing,” said Pfieffer. “Well, it turns out it wasn’t nothing, it was plantar fasciitis in my left foot. So we started working on that and then my tennis elbow started flaring up so we also worked on that. We worked on anything that was causing me pain.”

For Pfieffer and many other patients, conversation is the most important part of physical therapy. It’s constant evaluation of how the patient is feeling that is so incremental to having success in physical therapy. Attentiveness, evaluation, adjustment, and education are all part of improving quality of life, according to Pfieffer based on what she experienced at OSR.

“The beauty of OSR is that they’re very attentive to what’s going on and how the patient is feeling,” she said. “They listen and adjust the session based on how the patient is feeling. I know that we resolved things quickly because they listened to me and I listened to them. My sessions always started out with really good conversation about how I was feeling since the last session and that is so important.”

Even though Julie Pfieffer is pain-free now, she knows that it could all change if she doesn’t make some changes. For many people who live in pain, simple but hard life changes could be the answer to becoming pain-free or at the very least managing it. For example, many of the everyday things we do in life could be causing us pain if done incorrectly – from sleeping and sitting wrong to vacuuming incorrectly.

For Pfieffer, she may never know what caused her herniated disc and subsequent problems, but she thinks it was from carrying too heavy of bags.

“I don’t think we’ll ever know what caused it. It could be from all the heavy bags I used to carry, like the laptop and such,” she said. “So now I’m a lot smarter about not carrying around too heavy of bags and how I carry them. I’m just a lot smarter now about how I live my life in general because of physical therapy.”

However, making small changes is not the end of the road when it comes to maintaining a pain-free life. It also means continuing the right exercises to maintain strength in the areas prone to weakness and pain.

Pfieffer was adamant about having the healthiest life she could possibly have, which is why she started OSR’s Aftercare Program.

The Aftercare Program, said Pfieffer, is perfect for her because it keeps holding her accountable. Even more beneficial is that she’s able to do most of the exercises at home on her own time.

“It’s just such a tremendous value,” said Pfeiffer. “The specific program they created for me was a combination of everything we had been addressing in physical therapy. Even when I don’t go to the clinic to do the Aftercare Program, I still have a routine I can do at the gym. It’s something that will maintain my strength and keep me feeling as good as I am today.”

Because of her experience, Pfieffer is a firm believer in physical therapy. She says she’s felt better than ever since her back first started giving her problems a couple of years ago.

“I absolutely attribute this progress to OSR and physical therapy,” she said. “I’m back on the treadmill. I’m back at the gym. I’m back at doing some of the fitness classes that I wasn’t able to do before. They have gotten me to a place where I feel healthy overall. It’s made all the difference in the world.”