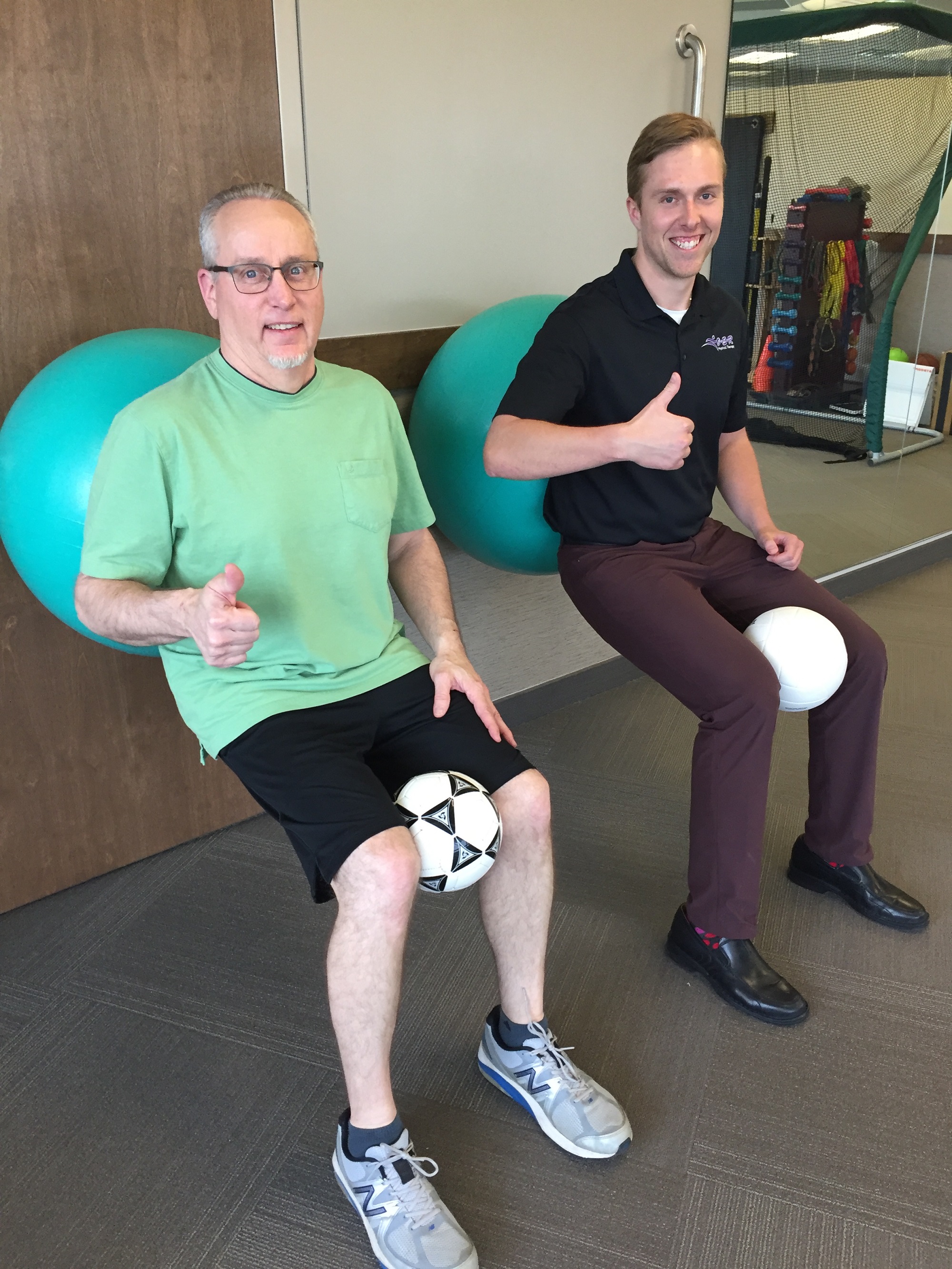 OSR Physical Therapy patient Tim Moore thought he’d never be able to fully walk again after his head-on car accident in 2014. Today, he says he can’t believe that physical therapy worked in rebuilding strength in his legs. “I wasn’t a believer, but now I am,” he says.

Tim Moore thought he’d never be able to walk normally again. In 2014, he was in a head-on collision with another vehicle that left him seriously injured but alive.

“Going 60-70 mph while the other person is doing the same, it’s amazing that we both got out of there alive,” said Moore, remembering back to his accident.

He had broken every bone in his midfoot, fractured other parts of his foot, and had broken the femur of his right leg among other bones. Spending seven weeks in the hospital and 16 weeks of not walking, he thought he’d never be able to join his wife on walks again.

It’s been almost four years with countless trips to physical therapy and doctors. However, he now sees the light at the end of the tunnel, and it’s all due to physical therapy, which has focused on rebuilding strength in his entire body.

Moore started physical therapy at OSR in November 2014, spending seven to eight months learning to walk again. He had to rebuild his strength in almost every area of his body due to the extent of his injuries.

“When you lay around for four months because you can’t use your legs or your shoulders, you lose everything,” Moore said. “So we worked on strengthening my legs first and getting me able to walk around. Then we worked on my shoulders and core and just overall strengthening.”

At first, Moore was skeptical about physical therapy and whether he’d be able to fully recover from any of his injuries. In fact, if you ask Moore, he bluntly admits that he wasn’t a believer in physical therapy. However, since his first trip to physical therapy in 2014, he’s experienced firsthand just how powerful and beneficial physical therapy is for rehabilitation and overall life quality.

“It’s been a great eye-opening experience from the very beginning. Prior to my accident, I didn’t believe in physical therapy,” Moore admitted. “But I learned quickly that it was critical. I know wouldn’t be walking today without it.”

After about eight months of physical therapy after his accident, he was able to walk again. However, he soon started experiencing back problems and numbness due to his injuries. So, in 2016, Moore returned to physical therapy again to fix his back.

“They helped me with my back issues, but since then I started noticing my left leg was getting weaker and weaker,” said Moore. “My right leg was the one that broke and now my left leg had a problem with weakness and numbness.”

Even though he experienced the benefits of physical therapy before, he still had no idea that it could help him with these new problems. So, for a year and a half, Moore went to numerous doctors and had many evaluations only for them to shrug off the numbness in his legs.

“I went to doctors. But, they said there was nothing that could be done and that other muscles in the leg would make up for the weakness,” he recounted. “But, I could tell something wasn’t right. When I looked at my leg there was a muscle missing in my quad.”

He continued to seek help, but with no luck from doctors. Then after four months of dealing with the muscle atrophy, it worsened. It became harder to walk up and down the stairs. Finally, he sought help elsewhere. He was given the suggestion to go back to physical therapy to help rebuild the muscles in his legs.

“It was the best suggestion anyone gave me up until this point,” said Moore. “I just wish it would’ve come sooner because I think we could’ve saved the muscle completely.”

Because of the atrophy and the extent of his traumatic injuries he won’t be the same as before, he said. However, doing the proper strengthening through physical therapy has made all the difference in the world.

Rebuilding Strength Is A Long Process

Moore has been in physical therapy now for just four weeks and he’s seen a remarkable improvement in strength.

“I’ve been walking better than I’ve ever walked since the accident. I don’t wobble anymore!” he said with a laugh. “I actually feel the muscles in my legs again. I’ve been amazed at how much stronger I’ve gotten in just the four weeks that I’ve been going to physical therapy again. It’s just such a big difference.”

Moore believes that the only reason he’s able to walk so well again is due to physical therapy. The whole focus of physical therapy is in strengthening the body to recover from injuries, manage pain, and prevent future pain and injuries. For Moore, it was all about building the muscles around his atrophied leg muscle. It wasn’t about just waiting around for his muscles to become stronger on their own, but doing targeted exercises.

After just three weeks, Moore could see and feel the difference in his legs. He plans on continuing his exercising at home after therapy to keep his legs strong.

“When you see results, it’s more motivating to keep doing it, even at home,” said Moore. “I’ve been pretty faithful. I plan to continue the exercises at home and after physical therapy because I can see that it’s working. I know I’m able to go on walks with my wife now because of physical therapy. So I plan on continuing the same exercises and whatever else they give me.”