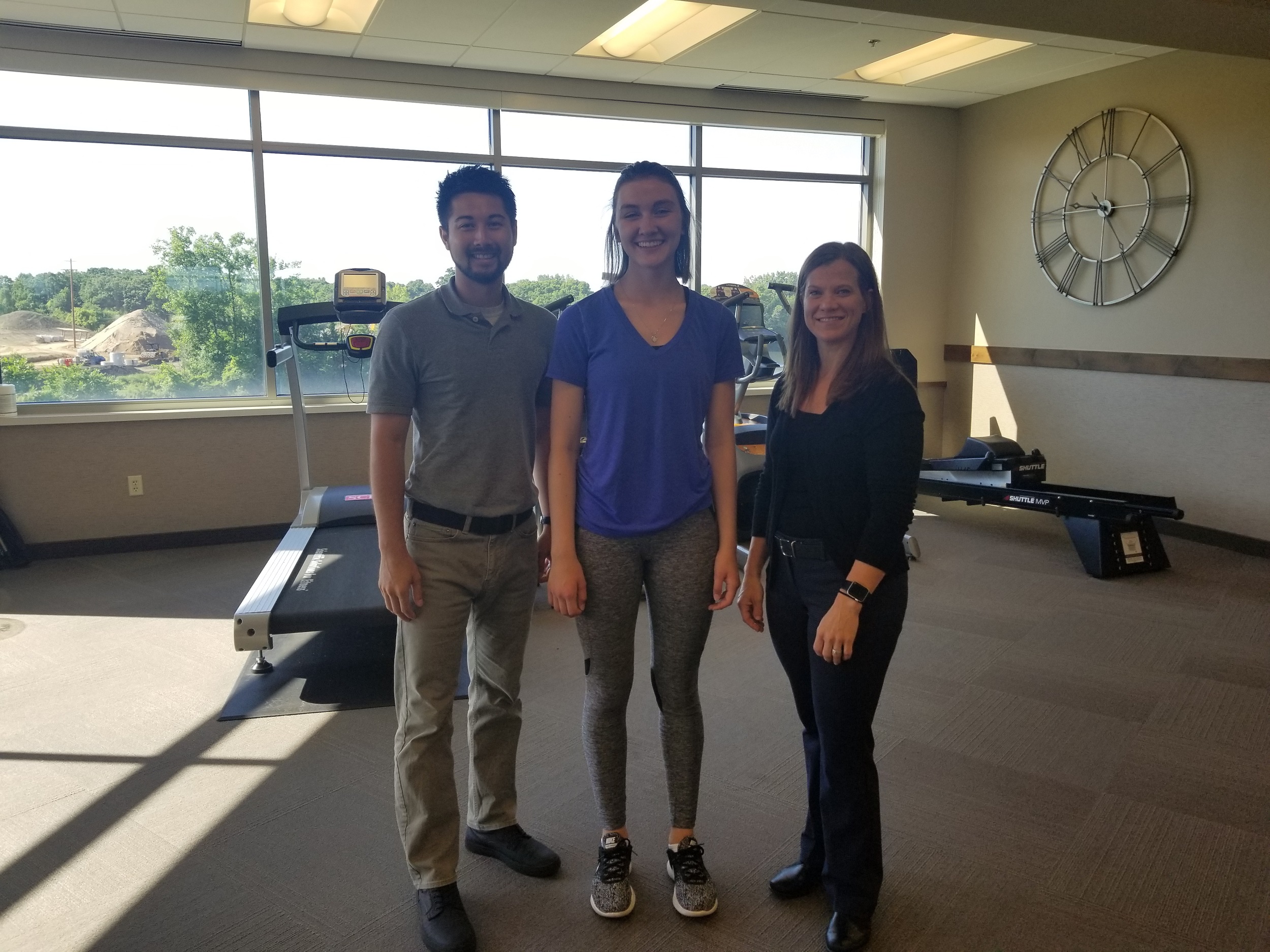 When OSR Physical Therapy patient Shannon Hickey’s (pictured above, center) back pain worsened during figure skating practice, she headed back into physical therapy. It was then that she learned just how close she was to getting a stress fracture.

Figure skaters are no strangers to pain. From bruises due to falling to muscles strains and sprains, pain is an everyday part of the sport. However, even though most figure skaters live by the motto “no pain, no gain”, they all know that there comes a point when pain could indicate something worse. This was the case for OSR Physical Therapy patient Shannon Hickey, who came too close to getting a stress fracture in her back.

The figure skater, who has the goal of becoming a double gold medalist by passing her senior free-skating test, knew something was wrong when she was in constant pain.

“I’m a figure skater, so with that comes a lot of falling down and getting back up. It comes with a lot of extensions and a lot of flexing, which sometimes come with pain,” Hickey said. “But I was just in a lot of pain and it was constant. It got so bad that I knew I needed to get it looked at and it turns out that I could’ve ended up with a stress fracture.”

It was not Shannon’s first trip to physical therapy as she previously had an injury in her back.

“I previously had a muscle strain on the right side of my back that I got physical therapy for two years ago, but I knew this new pain was nothing like that,” Hickey said. “However, the one thing I really took with me after going to physical therapy the last time was when to seek help.”

Hickey started out once again with physical therapy, but after her initial evaluation, she was told to get her back pain looked at even further to see if she had a stress fracture. Fortunately, her injury had not quite gotten to a full stress fracture. However, had she kept skating and ignored the pain, it would have ended up being a pars stress fracture, or spondylolysis. It’s one of the most common injuries in the lower back for young athletes, especially figure skaters.

When such a stress fracture in this area becomes worse, it can weaken the bone so much so that back is unable to keep proper positioning. This can cause the vertebra to shift, causing even worse back problems. Fortunately for Hickey, she was able to catch the injury before it worsened to a stress fracture and further weakening. Had she waited any longer, it could’ve resulted in persistent back pain and even surgery.

Taking Lessons With You Throughout Life

Like any sport, figure skating teaches lessons that you can take with you throughout life. You can confidence, persistence, and determination. More importantly, you learn how to get up after you fall and to never take a fall as failure. It’s simply a setback that can be worked through if you set your mind to it. These are lessons that are also learned from physical therapy and rehabilitating an injury.

Shannon had to take 12 weeks off from skating and training to heal her back. Even so, she’s never felt like she fell behind, but rather had a minor setback that she can overcome.

“Initially, we thought it was just going to be a six-week recovery. It ended up being 12 weeks,” the competitive figure skater said. “Yeah, it was hard to hear and deal with. It was horrible, but I know in the end it saved me from greater pain and injury. I’ll be competing soon. I know I wouldn’t be ready and I’d still be in pain if it weren’t for physical therapy.”

Her goal is to pass her senior free-skating test and land her double axel, one of the hardest jumps in the sport. She’ll maintain doing the same core and back exercises from physical therapy to prevent any more overuse injuries in her back.

“I’m still continuing and will continue to do the exercises they gave me. I want to maintain my core muscles I’ve built up through physical therapy,” she said. “These exercises were really helpful and I know it’ll prevent further injuries.”

There’s no time limit to when she’ll stop doing the exercises. Shannon believes that it’s the biggest reason for her recovery and injury prevention.

“I’ll just keep doing them as long as I have to. I want to go as far as I can with figure skating,” she said.

Related Content:
4 Ways To Deal With Back Pain
Should You Seek Medical Attention For Your Pain?
How To Prevent Injuries With Core Stability Training