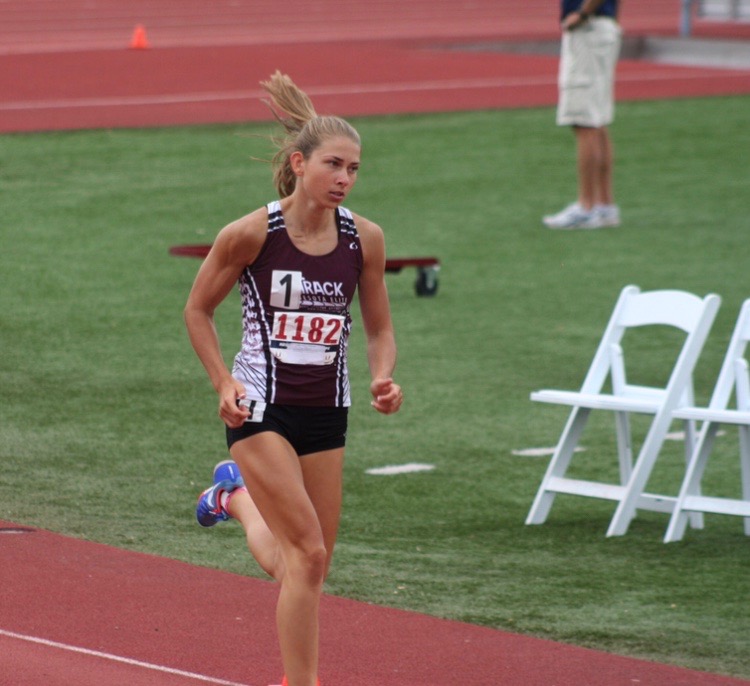 OSR Physical Therapy patient Kristyn Arends (pictured above) competes in both the 400 and 800 races. She is working on recovering from a stress fracture and preventing it from happening in the future.

OSR Physical Therapy patient Kristyn Arends is no stranger to sports – or injuries. The 18-year old Prior Lake High School soon-to-be graduate has been extremely active in sports since a young age. She’s dealt with knee problems and injuries as well as hip pain throughout her sports career, but that’s never slowed her down.

“I’ve been really active since I was really young,” Kristyn said. “I played soccer, basketball, and ran track up until my freshman year of high school.”

However, despite her desire to continue in multiple sports, it was cut short as a freshman when she had to have knee surgery. While playing basketball, she dislocated her kneecap when came in contact with another player and part of her kneecap broke off. It resulted in surgery and physical therapy to recover.

“After that incident, I had to stop doing all contact sports. So I stopped soccer and basketball and stuck with running,” she said.

Stopping contact sports lowered her risk of acute injuries due to accidents. However, she still found herself being plagued with pain and injuries – all of which snowballed into a foot stress fracture her senior year of high school.

Doctors and medical experts are always warning the public about the dangers of sports specialization. Recent research indicates that overuse injuries are more common in young athletes who only participate in one sport. It makes sense, then, to encourage participation in a variety of sports.

Kristyn’s interest in multiple sports was never a problem, however, until she had to stop playing contact sports because of her knee injury. Unlike many student athletes who decide to specialize in one sport and specialize early, Kristyn was always extremely active.

“I’m always running or biking or doing something,” she said. “It was really difficult when I had to limit myself because of no contact sports. But I love track. I plan on continuing it in college at Wisconsin-Madison next year.”

Even with stopping contact sports, however, and switching only to running, Kristyn was still having trouble with pain and injury. She had already visited OSR for hip pain in the past, where they worked on loosing up her hips and increasing her mobility and range of motion. Then, even after knee surgery, she was still having knee problems. OSR helped her once again in strengthening the supporting muscles, like her quads, and preparing her for the upcoming season. After fixing her knee and hip problems, she finally seemed to be doing great.

Kristyn picked up her training and started doing more and more work. Then, in February, she had to abruptly stop running because of the pain in her foot. She had been overtraining and pushing herself too hard for too long. It resulted in a stress fracture.

“I got a stress fracture from a number of things I think – overuse and overrunning, but also from all the pounding and stress on the foot,” she said. “I had been trying to get ready for the school season, but I guess I just did too much.”

Despite its reputation, physical therapy does more than just rehabilitate an injury. In every case, it’s about preventing future injuries through strengthening. This is exactly what Kristyn is focusing on, as well as changing her training to prevent overuse injuries from happening again.

Moreover, she’s looking at more than just doing exercises. She’s also going to a dietician as well as changing her training.

“Currently, I’m working with a dietician to improve my calcium intake so that I can improve my bone density. I just don’t want it to happen again,” she adamantly said. “My goal is to be a key 800 runner at Wisconsin next year, so I need to be better. It also means training smarter.”

Whereas before she was always pushing her limits during training, now she’ll approach it more cautiously.

“Now, I’m going to be a lot more cautious with my training and how I run, like trying to run on softer surfaces and not overtraining or overdoing it,” she said.

After years of being in and out of physical therapy because of problems and a knee injury, Kristyn is anxious to get stronger than ever and train smarter than ever. Besides learning new ways to stay injury-free, she said the most important thing she ever learned in physical therapy was to never give up hope.

“Because you never know when you’re going to start making progress and see that everything is pulling through and working for you,” she said. “Sometimes, like for me, it takes time before you see the results. But sticking with it and doing it right means getting to where you to be. So never give up.”